This blog started life with a short spell on Wordpress. And then was enterprisingly on both Google's Blogger and Wordpress at the same time.
This didn't last long. One platform was enough and when I tossed the coin Google tunrned up heads.
After eight years it is time to change again, and we're moving back to Wordpress.
Why? Maybe we will have a bit more flexibility in formatting and linking to non-blog website content. Covid lockdown brought the wordpress book off the shelf. With much stopping-and-starting the content here is now mostly available over there.
Over where? Well www.mpaulm.com of course! Have a look and send me a comment ... 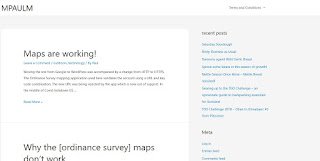 It is has become harder to network Windows XP with Windows 10, so we missed some of the pictures during the development of this nest full. But now a new solution, which makes the traditional old camera into an IP device brings the pictures right home. 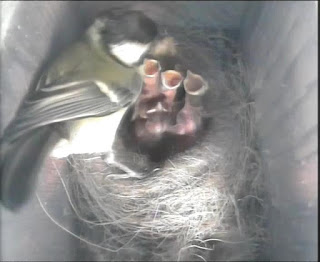 For a live feed look here
Posted by MPaulM at 14:52 No comments:

The ransoms season is rather short, so take advantage while you can! At this site  in southern England they are approaching their best in early April, but I have seen fine ransoms in Scotland at the end of May. 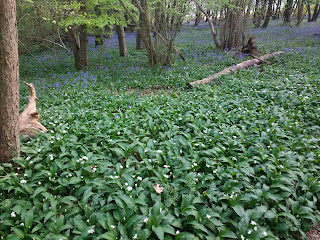 Two weeks after this first picture was taken, the bluebells are fading, and the scene is a mass of white star-like flowers, and the air is alive with a savory fragrance of onion-garlic! 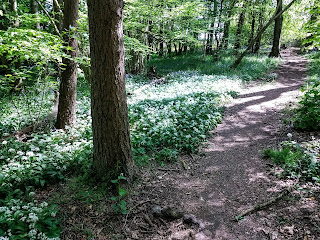 The leaves make an interesting seasonal ingredient for salads, for dressing mashed potato, for creating a special take on pesto, and a myriad of other uses. Cooking tends to reduce the flavour but it is still satisfying to use ingredients from nature which are not found in the store.

For me this season is a time to add colour and subtle flavours to my breads. Nettles is a regular, ransoms is another, both come earlier than the herbs grown in the garden and fields around and about.

A sourdough levain provides a good and flavoursome base for the loaf. This step however can be skipped and the additional flour and water added to to main recipe; just increase the active yeast amount by 50%.

This levain is a standard start to a light sourdough loaf. The ingredients are mixed together and left for 12 hours at around 22 deg C. Because I'll be using yeast too, the timing is not so critical; today it was left for more than 18 hours. 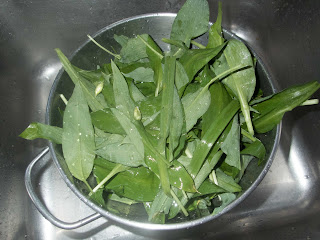 To prepare the ransoms pick over the leaves, taking care to remove other plants (one of their cohibitants in the woods is lilly of the valley, which is quite poisonous), and then rinse them in cold water. A minute or two in the microwave reduces the volume, when they can be chopped ready to be mixed into the dough.

Disperse the active yeast and levain into the water, then add some of the prepared ransoms, before adding the flour and salt.

Mix to incorporate and distribute all the ingredients. As always when adding a lot of green vegetable matter the water content will affect the hydration of the dough in a slightly unpredictable way. The 250gm of ransoms, with my flour, and the water quantities mentioned produced a dough of medium stiff consistency (see picture). 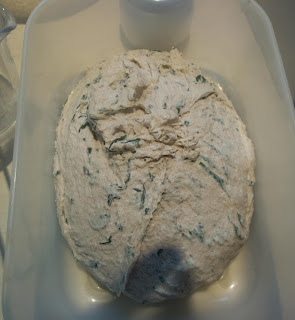 Then mix for 3 or more minutes to develop the gluten. The dough was stretched and folded one time after an hour, before bench rest an hour later and shaping into bannetons.

I used my normal baking method but added about 10 minutes to take account of the extra water content from the leaves.

After 45 minutes or so in the oven the loaves came out with a nice even crumb with visible patches of ransom leaves.

The flavour is a little savoury, but fairly neutral. Good for cheese at breakfast (or any other) time, and fine with marmalade too! 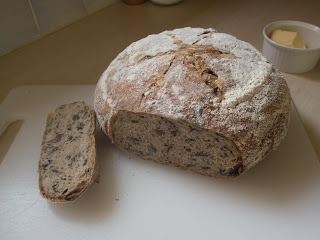