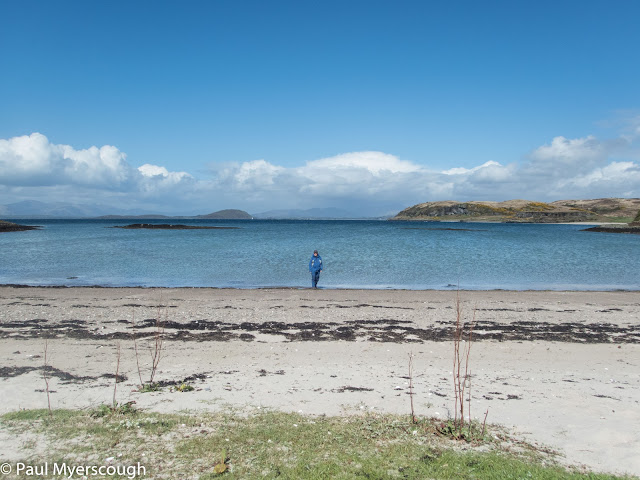 This year I captured my walk using the Spot Tracker which should record my location every 30 minutes. Is this truly representative? I always think of the occassions when I spend 30 minutes wandering in the wrong direction or zig-zagging up a hill and how in this instance it will show almost no distance travelled between two beacons. The information was recorded on Phil Sorrel's Socialhiking site (about the become defunct) and downloaded from there. This revealed some information gaps - ie there is not a beacon for every 30 minute period. This maybe a shortcoming with Spot (discussed on the internet elsewhere) and how it communicates. Anyway there is a good approximation of my steps across Scotland here.

For the first time pictures are embedded from an album on Flikr. Is this good? I'm not sure. If you double-click on a picture suddenly you are on the Flikr website scrolling through a photo album that contains a lot more pictures than shown here.
Push and pull the map in the window below to see the route in blue.

How to choose out of the 14 start points for the TGO Challenge? Oban is the southernmost and perhaps one of the most accessible, and so one of the most popular start points. For me, there was unfinished business in Iona - just 2 ferries and a bus ride away from Oban - which was pleasantly dispensed with prior to the start of the big walk. 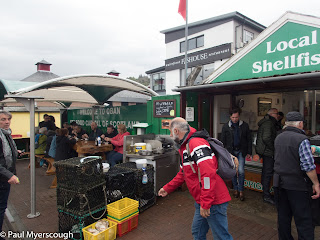 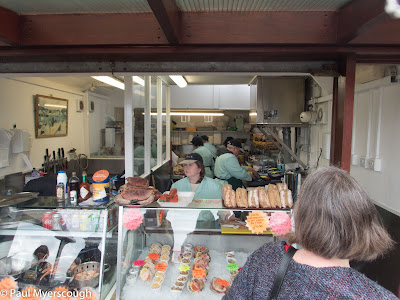 This small port on the west coast of Scotland is easily reached by a 3 hour train ride from Glasgow. Early May seems to be very much 'in season' for tourists of Western Scotland with a kaleidoscope of nations at the very serious shellfish stall on the quay. 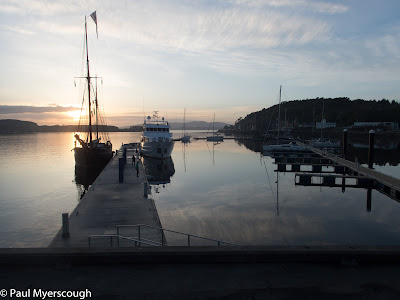 On Thursday 10th of May there was a palpable change in the atmosphere around the town as more and more people arrived of a certain age and demeanour marching here and there with large packs on their backs. And on Friday morning I followed after the throng heading along the seafront to furthest ferry terminal which would take us to island of Lismore and the start of my walk. 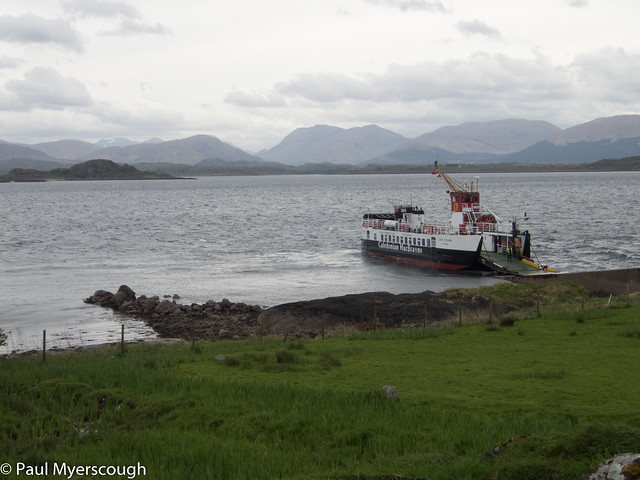 This hour long trip provides an opportunity to reflect on the journey ahead - a step removed from the business of walking, and with a panoramic vista of the landscape with its ups and downs and geographic features all looking small and distant. On the other hand there is a couple of comfortable seating areas on the small car ferry where you can sit and talk and avoid the fresh air and views (after all you will get plenty of that stuff later!). 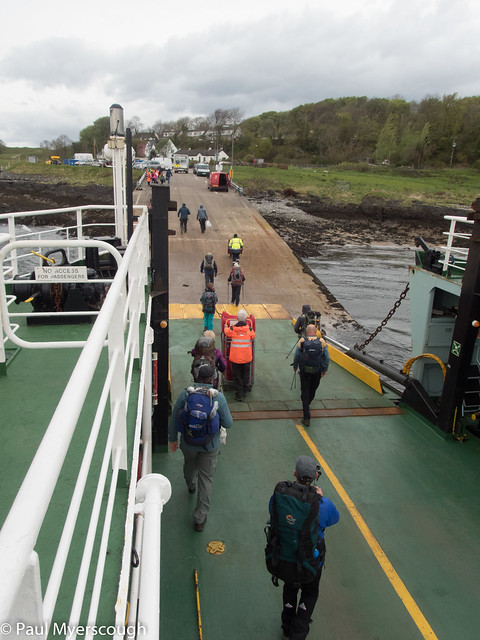 We were 9 or so that raced ashore eager to start our Challenge. Those still in chatting mode gravitated towards a road walk. At the rear I realised that something did not quite match my expectations and I backtracked to find the field route. When I eventually surrendered to the road there was just Robert from Tennessee. He was happy to have a trailing wind, I was please to have a clear view of the hills on the mainland, and we were both pleased to reach the Appin ferry in good time to avoid the long lunch break in the timetable. 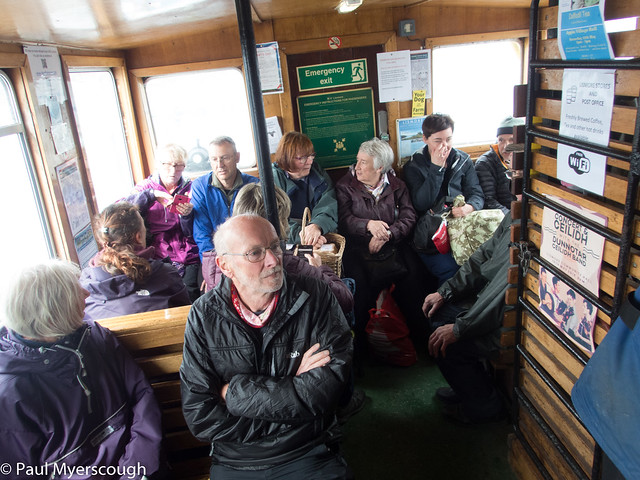 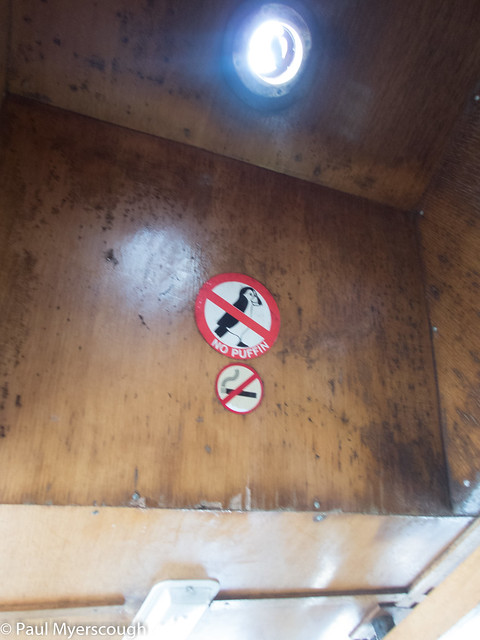 On reaching the mainland the majority rushed into the local hotel for lunch. I was more inclined to restart my walk. And found my route to the Jubilee bridge and the reclaimed railway which is now a hardsurfaced cycle path. 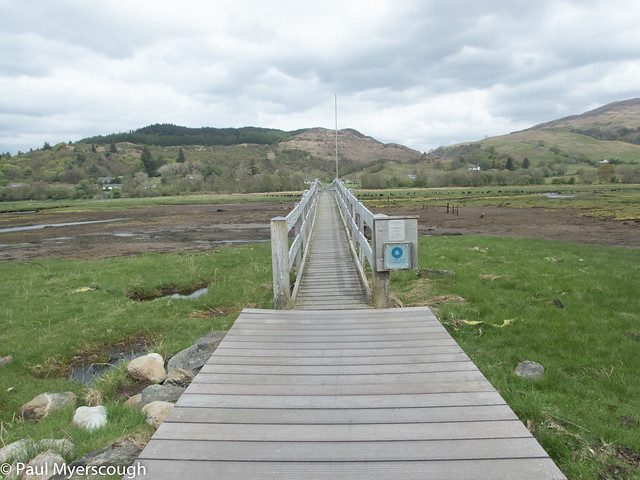 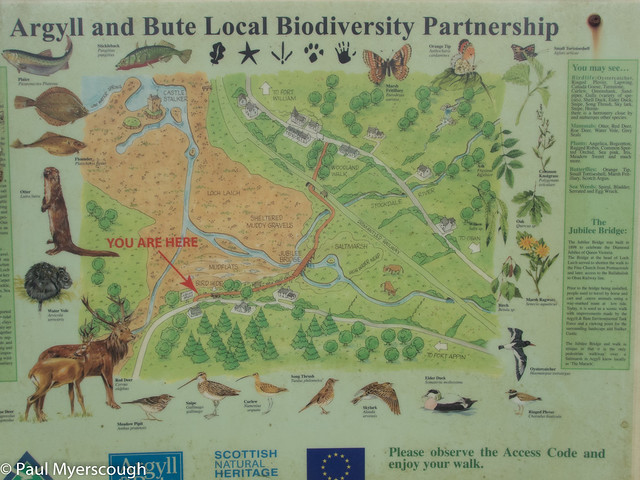 It is always a relief to move onto a softer surface and despite some gentle rain I was happy to be heading into the hills to look for my first campsite. 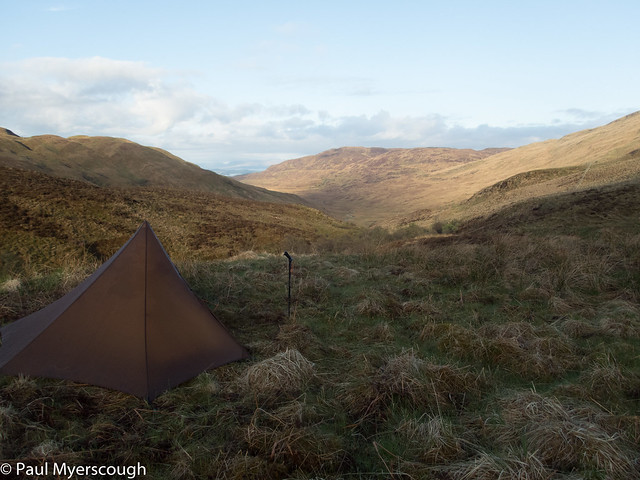 The spot I found on the map was a bit rougher than expected and I travelled on and up towards the bealach over towards Glen Creran. 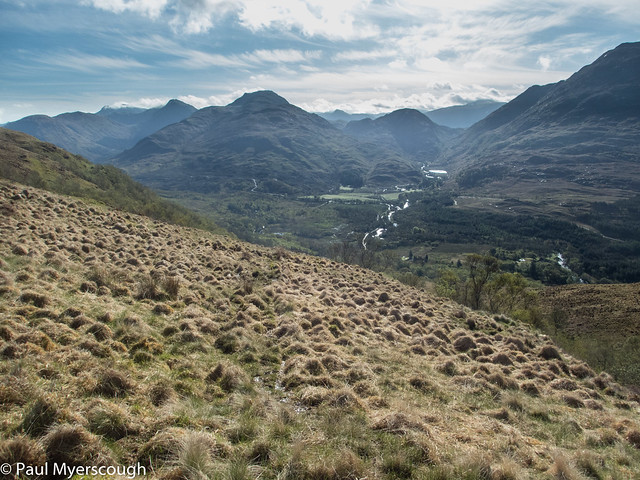 Although pathless at the higher level, I had identified a footbridge on the map which was a good target to aim for on the way down to the glen. On the other side a ridge leads enticingly eastwards over munro Beinn Fhionnlaidh. It's a long haul - about 5km - pathless, and despite fine visibility the ridge line is not so clear on the ground as on the map. 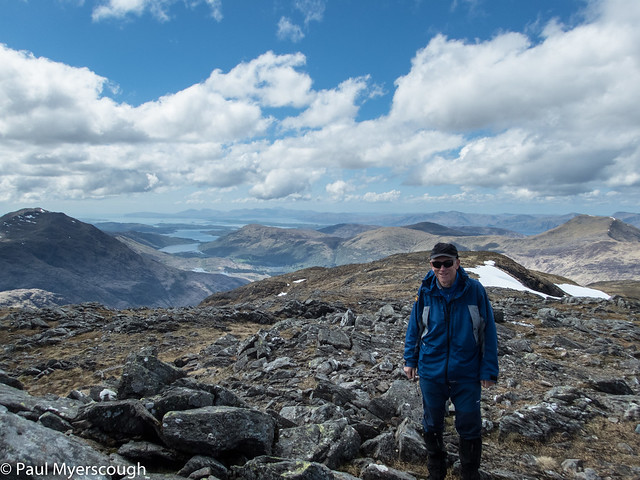 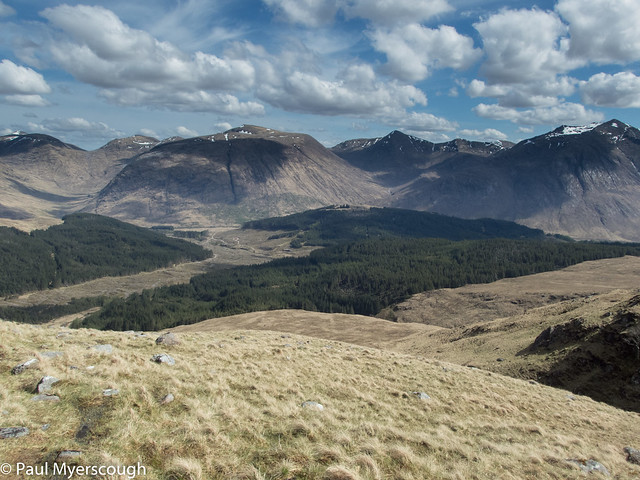 From the top there is a good view to the hills on the other side of Glen Etive - the target for the next couple of days. In fact the views are terrific in all directions, and I take a 360 degree movie in an attempt to capture the memory. 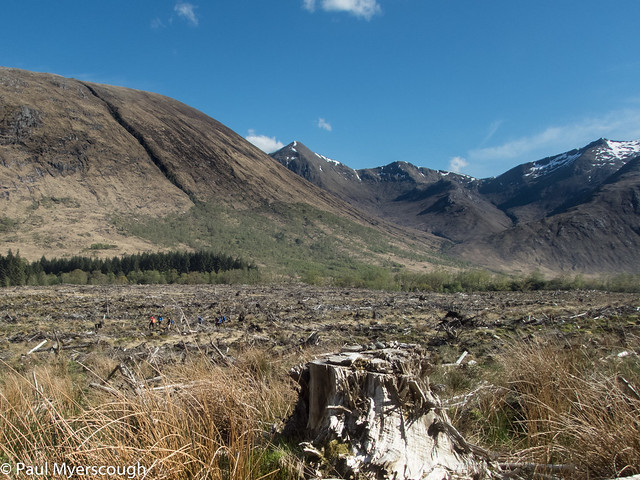 Down below dark scars on the ground converge on a forest track which leads through Etive forest to the valley bottom. Vast swathes of trees have been felled on such a scale that the gang of men spraying the remaining undergrowth are almost invisible (reminder to self - don't drink from streams passing through forest enclosures!).

Eventually I come to the road and, to my suprise there's quite a few cars. As I round a bend there, sitting on a wall, with a giant pack on the ground beside him is Ian lamenting how Glen Shiel has changed since he last visited it on the TGO 20 years previously. Down the valley he just passed 'lots of party animals with their pop-up tents and loud music', and around the next corner I pass Matt another TGOer who confirms the story and can't understand how I can be going the opposite direction to him.

Before long I turn off, finding my bridge across the River Etive and passing an unfriendly (but absent) resident who has blocked the public track and tried to send walkers around their plot on a wet and muddy diversion with a notice "please respect our privacy" - I resolve next time to bring wire cutters and a notice "please respect our public right of way". A little further there's a camp spot next to the river and near the bottom of the ridge stretching down from Ben Starav. It is weekend and despite my late pitch there are still a few walkers returning down the path from the hills, the last rushing by at about 10pm. 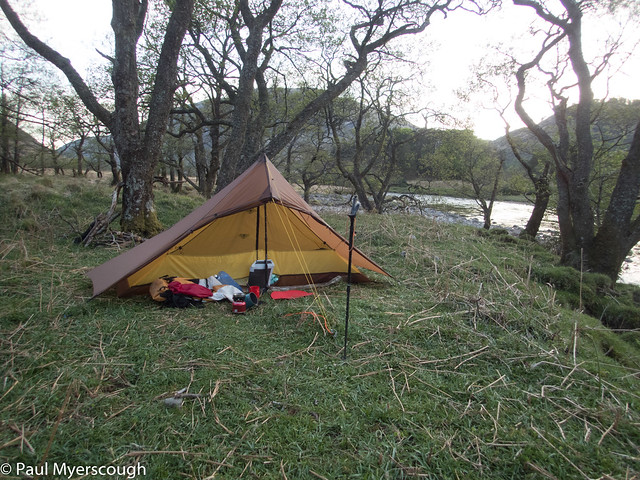 I rested well in the knowledge I was on schedule and the weather set fair for one of the highlights of the trip the following morning.