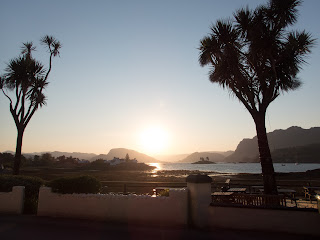 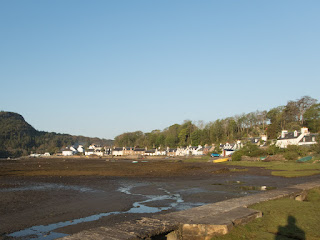 Plockton village is in an enclosed picturesque bay facing across the water to a bulky and barren rocky mass hiding Applecross. Easily accessible by train on the Inverness to Kyle of Lochalsh line and handy for excursions to the Isle of Skye, this is a popular tourist destination.

Push and pull the map in the window below to see the route in blue.

Someone told me it is their least favourite starting point for the TGO because it involves a start of 5+ miles on the road to Dornie which is another starting point. The town is backed by some low hills however with many small lakes and excellent far-ranging views in all directions. Who wants to walk on the road?

The outstanding excursion on foot from Plockton is to the 'TV mast'. And this provides a good enough TGO start, a short section around the shoreline then upwards through woodland rich with primroses to reach about 350m - with spectacular views. 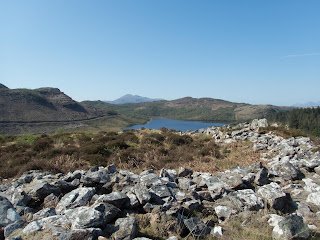 From here there's some cross country via some unexplained ancient buildings - to reach the A890. The ridge beyond is pathless and not high, so heather dominates the landscape.

Its nice to look down on Dornie and the impressive intersection of lochs below.

I came down to Loch Long a little earlier than planned and enjoyed some interaction with local school children before marching along the side of the Loch in the sunshine. 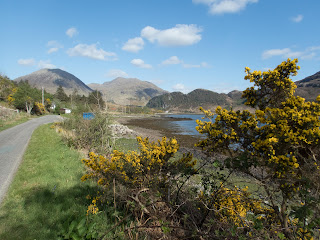 This is a beautiful valley and towards the end of the loch there were glimpses of snow patches on the ridge which was part of tomorrow's route. Camas Luinie was tonight's target. There is a bunkhouse here, but my plan was to camp on the land beyond the end of the road. 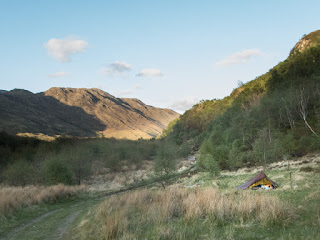 The streams from the hillside crossing the path were completely dry, but there was a trickling sound above and with a bit of a scramble I could find enough for my needs.  Despite uneven ground a good first night.


An eight o'clock start toward Falls of Glomach brought me in a short distance to the camp-site of 3 TGO starters from Plockton - Garry (Ben2Ben on Twitter), and Tony Bowe and Lee Wells. Tony and Lee would follow me up the Falls which Garry branched off ealier towards Morvich. 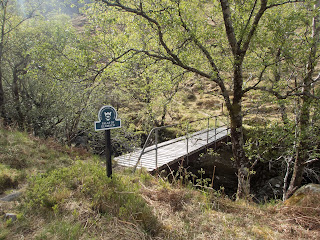 The path by the Falls of Glomach is narrow and high above the river and dramatic with one or two scrambly bits. I was happy that the weather was fine. Following the obvious route I did not come very close to the falls; I learned later that there is a closer approach - probably best taken back from the top without a pack to a viewing point. 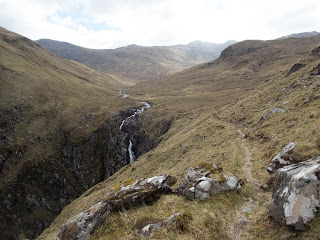 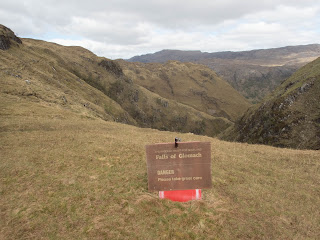 The river was quite low, much lower than on my last visit at the same time last year. Crossing was possible anywhere above the falls, but for a dry passage I moved up further a few hundred metres beyond where the river divided in two. Heading up the ridge I was attracted by about 30 deer that moved in stages up a sloping terrace in front of me. This took me onto Creag Glass. 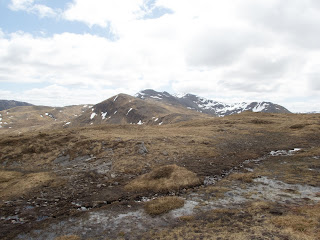 From here the route to the main Glen Affric ridge is straight forward - with the three tops Stuc Fraoch Choire, Stuc Mor, and Stuc Bheag high enough to be Munros, it is only the last Sgurr nan Ceathramhnan which qualifies. At the West Top the direction changes from south to east and the narrow path to the summit is pleasantly airey. 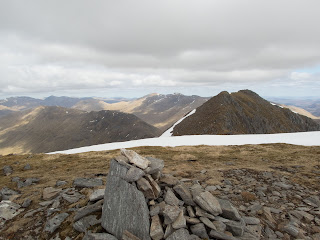 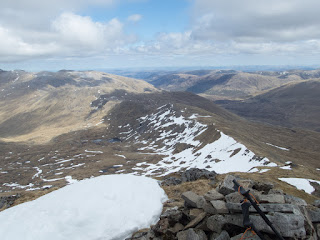 A full 3 km in this direction brings you to the far side of Stob Coire na Cloiche where the path heads down to the Altbeithe youth hostel in the valley below. From studying the map it looked like this was the best place on the ridge to camp. I spent a full hour looking for the ideal spot - in vain - eventually using a small piece of level ground quite close to the top of the ridge. Water possibilities were not attractive - with a few algae covered pools and trickly streams fed by snow melt. 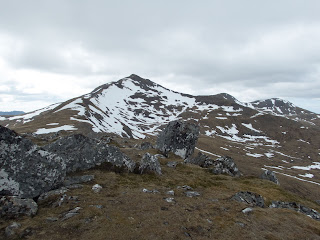 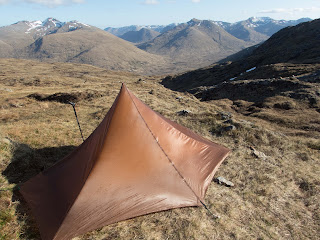 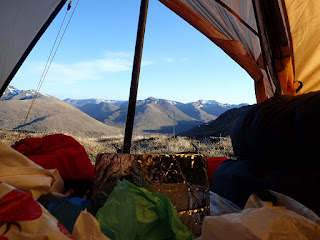 My pitch was small - just the right shape to back my tent into the wind from the north. An hour later this turned 180 degrees and my tent began to flap and inflate and became very cold. With no possibility to change orientation I was nervous about how this might develop - fortunately the wind dropped and I had a quite night.

Push and pull the map in the window below to see the route in blue.

I awoke to clear blue sky, but before I could get out of my sleeping bag large snow flakes drifted down across the tent opening. An hour or so later I was on the way up An Socach in cloudy and drizzley snow and rain. A day walker arrived out of the mist when I was on the summit - heading for Beinn Fhionnlaidh he had started out at 6am cycling in from his car. I left him eating his breakfast. 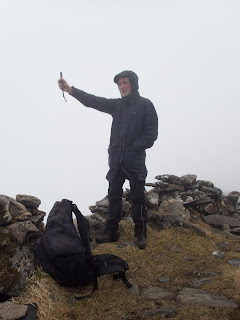 He appeared again out of the mist as I took a sandwich on the top of Carn Eighe. A quick check indicated a temperature of 2-3 deg celsius and a wind speed between 12 and 16 mph. He headed north while I went east following a route that despite the cloud was full of interest with many twists and turns down to Sron Garbh. 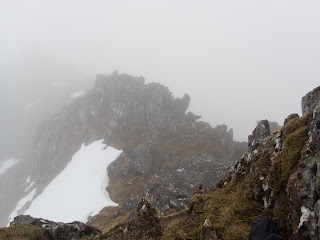 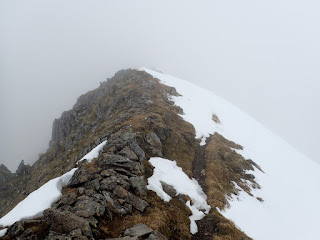 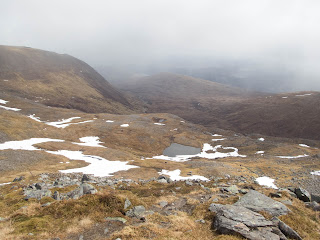 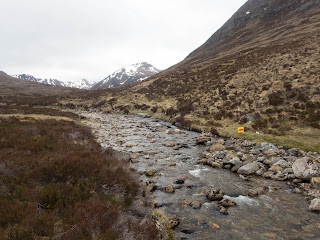 From here a direct route to the river below, circumnavigating snow patches and only in the lower reaches finding the hint of the path marked on the map. The river crossing was highlighted by signs placed by the local mountain rescue team. On the other side there is a well-made track heading over the hill and down to Glen Affric Lodge.


The way to Cougie requires a bit of cross country from the shore of Loch Beinn a' Mheadhoin to the track which runs past Loch nan Gillean. This is tough going, soft underfoot and subject to a long diatribe by Iain at Cougie who maintains that the west side of the river is firmer ground but because of complaints by walkers the right of way was moved to the east side of the river. As far as I could see there was no path on either side and I was please to pop out of the undergrowth to join Stephen Rouse and Dave Stokes on the track for the last 3 or 4 km to Cougie. 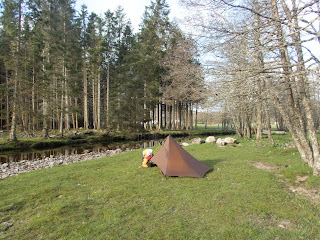 Stephen took B&B at the Lodge while Dave and I camped at the Keepers Cottage. Having ordered a meal I joined the other visitor Brad Williamson at the impressive elm table and collected a resupply package which Iain and Sasha kindly held onto for me. This was Sunday night and some young people were drinking beers by their cars with sound systems blaring out. 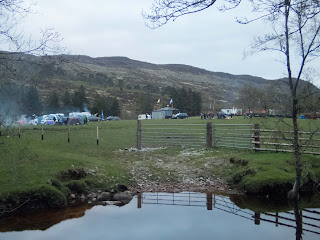 Later, at around 9pm, many cars arrived in the next field, fires were lit, and a band started singing on a stage set up with a sound system. A party started and went on until about 1am. This was a bizarre SNP rally which apparently started in a big way on Friday then moved to the north for Saturday night only to return as we were getting into our sleeping bags on Sunday.